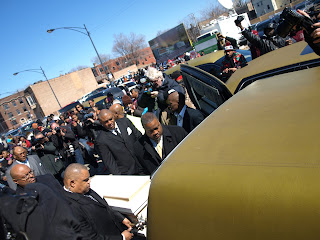 Cold. I felt only cold, standing over the tiny casket, bearing the body of Jonylah Watkins, who, four days shy of turning six months old, was murdered by a cold-hearted, cold-blooded killer.
Cold I felt, standing inside Leak & Sons Funeral Home with the knowledge that the killer, in all likelihood, is a black man and that instead of lying in eternal sleep, Jonylah ought to be resting soundly at her home in a crib. Numb I stood, facing the truth thatwe as African Americans have become our own worst enemy. That we must hate ourselves. That we seem hell bent on self-destruction.

What else might explain this incalculable infliction of pain at our own hands, the theft of life and innocence?
It is cold, so cold. And yet, I am reminded that Jonylah is not the first six-months-old baby girl slain by a gangbanger’s bullet that I have written about. I cannot shake memories of Rashonda Flowers, who was being pushed by her mother in a stroller in the 4100 block of Cottage Grove Avenue, in spring 1990. Her mother told me back then that she heard a pop but hadn’t realized anything was wrong until she felt a sudden cool breeze then knelt to cover her baby with a blanket and saw blood soaking Rashonda’s tiny blue and green knit bonnet.

The bullet penetrated Rashonda’s skull. She died the next morning. The shot turned out to have been fired by two teenage known gang members who admitted to police they were testing a rifle while also getting high. I wrote in a story back then: “The bullet was not intended for 6-month-old Rashonda Flowers, but it killed her just the same.”
That was 23 years ago. And today, I might write the same of Jonylah. Except I cannot believe the gunman last week who police said crept from a gangway upon Jonylah’s father—the apparent intended target—as he sat holding his daughter in a minivan, did not see her, her eyes shining innocence, her rosy cherub face glowing, nestled in her father’s arms. And yet, he fired anyway.
How could she not have been a “target”? How could his heart be so cold? Cold. Cold was the click of the throng of media cameras at the funeral service inside the New Beginnings Church on South Dr. Martin Luther King Jr. Drive. Cold the fact that on this street, named in honor of the slain civil rights leader, there was evidence that his dream for his people has become a nightmare—as police stood guard to ward off any attack of gangs known to open fire at rivals during funerals.

Chilling were a mother’s wails: “I want my baby back...” Chilling the sight of two young parents, standing helplessly, forever wounded, over their murdered infant’s casket. Chilling was the sight of a black and gold hearse out on King Drive, waiting to carry their baby to her final resting place.
And just as cold is the knowledge that if Jonylah’s daddy, instead of Jonylah, had been the one murdered, his slaying likely would have ended up in the police blotter—end of story. Cold is the reality that upon learning of his reported extensive arrest record, so many of us decided that he might have deserved being shot down like a dog.
Except no one deserves that. Not Jonylah. Not her daddy.
And yet, it’s clear that we still don’t get that. It’s a fact that chilled me to the bone, even as an icy wind blew and the hearse carrying Jonylah crawled down King Drive.
Email ThisBlogThis!Share to TwitterShare to FacebookShare to Pinterest
Newer Post Older Post Home