One: That's the number that should matter most 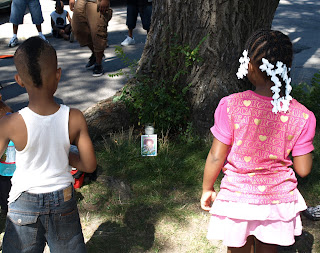 One. One bullet. One gun. One hot summer's night. One death. One city. One dream.
One funeral. One father's grief.
One community's scourge. One mother's tears. One child's fears. One. One last kiss. One pastor's plight. One hope. One fight.
This is the first in an occasional, yearlong series that looks intimately behind the numbers of murders in Chicago, which in 2012 totaled 506—more than one a day, nearly 10 a week, about 42 a month.

The numbers tell only part of the story in a city with a deadly brew of guns, gangs, and brazen gunmen with a seemingly insatiable thirst for blood. For lost in the number of homicides each year, in this city, now dubbed by many here as “Chi-raq,” is the number of recorded shooting incidents last year. That number, according to police: 2,460.
So the death bell tolls, here in a town where hundreds are shot down in bloodstained streets, and where murder on the city's West and South Sides has become as commonplace as the rickety rumble of a downtown elevated train—momentarily interrupting time and space, then passing benignly.
So the body count mounts: No. 1… No. 13… No. 21…
And yet, the most significant number somehow slips through the cracks.
That number?
It isn't the hundreds of young people or the number of innocent little school-age girls and boys caught in the crossfire of gangs in the light of day, even while at play. It’s not the number of times the agony and wail of loved ones rises after the gun smoke has cleared and another soul lay fatally wounded, like road kill.
It isn't the year-end tally. Not the more than 500 people murdered last year that ought to be sufficient enough for one city to find some way to at last make the shooting stop.
The most important number: One. And the most significant story: The story of one.
For lost in the bean count, in the routine tallying of murder is the individual toll, the human faces, the names and souls behind the numbers, the real costs and loss. Eroded is our sensitivity to even one life extinguished by murder, let alone hundreds—moreover, hundreds of thousands in America over just the last 35 years. Lost amid the notion that a murder victim may have “got what was coming to him” is the incalculable value of human life.
In losing sight of the significance of “one,” we slip slowly into the callous complacency of accepting what we once deemed unacceptable, damnable, horrific. And this can be the first misstep down the slippery slope to genocide, Maafa, Holocaust. They all begin with one.
One.
One father’s kiss. Leaning into a bronze-colored coffin last Thursday night, Esteban Dorantes lovingly kissed his son Rey goodbye as mourners, most of them young, sniffled, wept aloud or tearfully hugged.
Rey should have turned 15 just two days earlier. Except, by then, he had already been dead for four days.
He was standing on his porch in the West Side’s Humboldt Park about 10 minutes before midnight Friday Jan. 11, when two gunmen emerged.
They walked up, police say, opened fire, leaving behind nine shell casings. Bullets found their mark, piercing the teenager’s flesh, carving a deadly path.
Rey was not the city’s first slaying. And it doesn’t matter much to his family which number is his to claim in this year’s official murder tally. Dead is dead.
One murdered son. One grieving father.
One kiss goodbye and enough heartache for a lifetime, caused by the murder of just one.
Email ThisBlogThis!Share to TwitterShare to FacebookShare to Pinterest
Newer Post Older Post Home