A bullet in her brain; Daughter presses on

By Alesia Wright
All she can remember is the ringing in her ears. It was Thursday, March 2, 2006, and just another normal day for the 18-year-old Ryann Brown, a senior at Simeon High School. “It was a regular day. I was trying to be slick. I drove my sister’s van to school and then I had brought some friends home so she could let me drop them off so I could keep the car,” Brown said, reflecting on that day. “She ended up going with me, we ended up going to my other friend’s house playing cards…we left out the house and I went and got in the car with my other friend.” 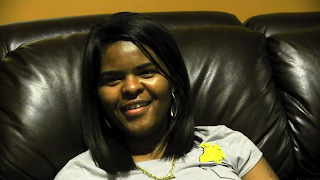 Brown had always been a hard worker, very determined, and always very independent, according to her mother, Kimberly Johnson. She had been looking forward to graduation and prom and all the other perks and aspirations that comes with being a senior in high school. But for Brown all of this was cut short.
“All I remember is ringing in my ears,” Brown said, now six years later, sitting next to her mother on the black leather couch in the living room of her Roseland home.
While sitting in the car that night on 77th and Peoria Streets, with a 20-year-old male friend, an unknown gunman walked up to the car and opened fire fatally hitting the young man multiple times in the chest, according to Ryan and published reports. One bullet struck Brown in the head.
In critical condition, Brown was rushed to Christ Hospital. Brown says that it has been a struggle and a long road to recovery.  “My daughter has had four surgeries on her head. The bullet remains lodged in her brain,” Johnson said of her daughter. “She has a titanium plate inserted in her head.”
Being listed in critical condition for a month or so, Johnson as well as Brown found it very difficult to see the light at the end of the tunnel. But it was only the strength of their families that kept their spirits up and kept them moving forward towards Brown’s recovery.
“And as long as I was focused on trying to figure out for them to catch who shot Brown she didn’t do well and I didn’t either. When the focus got switched to let’s just focus on her getting better, she got better,” Johnson said, “She hasn’t went backwards since. She’s in school at Daley College…she’s scheduled to graduate this May.” 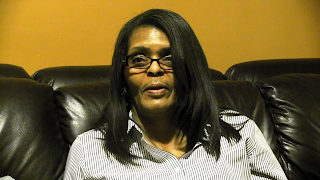 Daily activities such as a simple shower had become a task once Brown was able to begin to try doing for her. Becoming so frustrated and fed up, Brown even found herself throwing up her hands and saying, “forget it.” “But I knew a lot of people was in my corner. A lot of people had my back…I just took a lot of stuff for granted before. It’s just hard, daily life,” a seemingly soft-spoken Brown explained.
Hard times hit when Johnson lost one of the two jobs she worked so that she could be with her daughter while she recovered. But there seemed to be a false glimmer of hope with Crime Victims Compensation.
“It sounds good, but it’s not good. It hasn’t kept up with the times…it gave me a false sense of security,” Johnson explains.
Johnson said the family was not compensated for the financial loss and medical bills until 18 months after Brown’s shooting. By this time, she had to file bankruptcy to keep her home.
The family’s strength was tested yet once again when her youngest son, Ricky Brown, was shot and killed just at the bottom of their house steps as he was headed out to work on the morning of March 21, 2012.
Even after all of the drama and tragedies that surrounded Johnson, she has managed to keep her head up move forward.
“We only have like five minutes to be upset, then we got to start getting in to the solution. So go over there cry for your little five minutes, then come back over here because we got to fix this stuff,” Johnson remembers telling her daughter.
Determined, Brown returned to school in 2008, and expects to graduate in May 2013 with a degree in business administration. She also plans to open a center of rehabilitation for people who are survivors of gun violence, just like her.
Email ThisBlogThis!Share to TwitterShare to FacebookShare to Pinterest
Newer Post Older Post Home