Redeemed: A young man's journey from gangs to God

By Meredith Dobes
Anthony Orsini had a new, fully loaded .32 caliber revolver in hand when he walked up to a rival gang member, put the gun to his head, and pulled the trigger. Then, the cylinder spun, he recalled recently, but nothing happened. Orsini is the self-admitted son of a member of the Latin Kings street gang and he got his own initiation into the gang at age 15. Then at age 16, he joined the Spanish Lords, he said. His nickname was Malo, Spanish for “bad.” His mentors were older gang members. His peers were in the gang, too.

All those of around him told him that he had only two options: To end up dead or in jail. Jail is where Orsini landed at age 19 after the incident with the gun. But all that was before Orsini met Ronald Gorny.
Gorny heads Crossfire, a gang ministry program in Chicago’s South Loop that is run through Willow Creek Community Church, which is headquartered in South Barrington. Gorny says he knew Orsini’s father and was offered protection by him in the 1970s when Gorny worked to spread the word of God through the Latin Kings community.
“I get a letter from this guy, Ron Gorny,” recalled Orsini, now approaching age 25. The letter was from the country Turkey. “I thought it was a mistake. He gave me an overall introduction of who he is and that he knew my dad.”
Their relationship was born.
At first, it was the relationship of mentor and mentee, but it quickly grew into something deeper, something brotherly. They understood each other. Their journey, which has spanned several years, is still ongoing. And in that journey lies lessons, they believe, for helping other wayward young men find a way back to life, love and happiness, if not also to God.
This is their story.

Genesis
Gorny, who also runs an excavation site in Turkey, sent the letter to Orsini midway through Orsini’s two-year sentence for the gun assault charge. Orsini was hanging out with other gang members when one got a call that rival gang members were a couple of miles away.
“A rage came over me,” Orsini said. “I wanted to confront these rival gang members. I wasn’t really strategizing, just doing. My legs were walking, but my mind wasn’t thinking.”
Orsini said he was picked up by older gang members who gave him the gun and drove him to the block where they found rival gang members. It was around 8 p.m., near a school, he recalled.
“He was like a deer in headlights,” Orsini said of the rival after he pulled the gun on him. The rival ran away, and Orsini attempted to chase him.
“But I heard a loud clicking noise, metal on metal,” Orsini said. “I look up. His friend was in a tree. I seen him pointing his gun down at me, trying to shoot me, and his gun jammed.”
Orsini said he had walked into the middle of a police surveillance situation where police were filming the rival gang members selling drugs. Orsini described the Spanish Lords as being connected like brothers.
“I didn’t have brothers or sisters,” he said. “I would hang out with them everyday, all day. … They were my family. That was my job.”
When Orsini was 16, he dropped out of high school and hung out with the gang more. Orsini said initiation, or violation, involved getting beaten below the neck and above the waist for about three minutes by other gang members. As a member of the Spanish Lords, Orsini said he would sometimes protect the gang’s territory while at other times he smoked weed with other members and also sold drugs. When he was 21, Orsini said he started to wonder if there was something else to life besides thug life.

Salvation
“It was a long journey,” he said. “From ever since I was born, I was raised amongst gangs. … When I was 21, I started to realize there’s gotta be something better.”
Orsini communicated with Gorny through letters and anticipated meeting him once he was released from jail.
“I felt like it was an answered prayer,” he said. “At that time, I didn’t have Christian influence. I knew nothing about Jesus. … He was the first introduction God sent toward me, the first person God put in my life to open all doors.”
A month after Orsini was released from jail, he said he was sent back again for three more weeks.  After that, he called Gorny.
Orsini got involved with Willow Creek’s men’s breakfast in 2007. The first time he attended, he played basketball with another former gang member. They discussed how they got involved with the church. And after telling their stories, the man told Orsini that the person Orsini attempted to shoot was actually his brother.
“I knew something was going on here,” Orsini said. “I was going to start paying attention and be obedient to an extent. I stuck with it.”
Gorny and the church men’s group arranged for Orsini to come along with them to the excavation site in Turkey, which Orsini said was an incredible experience for him.
“You have to picture this,” Gorny recalled of Orsini. “He dressed like a gangbanger, looked like a gangbanger and talked like a gangbanger, but in the middle of a conservative Muslim village in Turkey.”
At that time, Orsini called his girlfriend. She told him she was pregnant.

Deliverance
The pregnancy motivated Orsini to officially leave the gang, he said. Gorny drove Orsini to a place where Orsini and the leaders of the Spanish Lords agreed to meet.
“I had this confidence,” Orsini said. “I guess you could call it swagger. It wasn’t what I felt when I tried to shoot that guy. It was more of a positive aggression. I felt that same feel but in a positive way.”
Orsini said the leaders already knew what he was there for. They had heard rumors about him attending church. Some had even done away with his old nickname, Malo, and started calling him Bueno, Spanish for “good.” The leaders did not give him his violation out, telling Orsini that they did not want to risk hurting or killing him. They told him if he wanted out, he could just walk away.
“I said, ‘all right.’ I shook their hands and walked away,” said Orsini. “I would see them, and there’d be no type of animosity or anything, almost like I never knew them. I knew them from another life, another world or something.”
Orsini began his transition into the Christian world, which he said was difficult for him, at first.
“It was surrounded by highly educated people,” he said. “Some people never struggled a day in their life, it would seem to me. It was a crowd I wasn’t used to. I had to adapt, blend in, fit in.”
Orsini said he learned how to do this from observing Gorny, who in addition to Willow Creek’s Crossfire, also is affiliated with a Christian group called Gangs to Grace. That organization is run through New Life Covenant Church in Humboldt Park. The program is essentially run at a gym and allows neighborhood youths to play basketball.
Gorny stressed that one of the most important things to remember about stories like Orsini’s is that changes don’t happen overnight.
“It takes time,” Gorny said. “You have to hang out and be with the guys. It’s this whole mentoring process. That’s what we did. I would see him two, three, four times a week, sometimes.
“Every Wednesday, we went to New Life Covenant Church’s bible study and would go to his apartment afterwards and sometimes talk for two hours. It was kind of being together and knowing we had each others’ back.”
Gorny said he believes one of the most important things in faith- 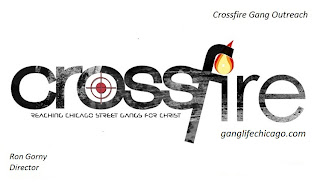 based ministry is the bond between mentor and mentee.
“There’s this whole sense of growing together,” Gorny said.  “This is a process that has been going on since 2007. We’re still growing, still learning, still moving on, both of us.”
Gorny said often it’s necessary to give a lifetime commitment. He added that the assumption that God is alive, active and intervening in people’s lives underlies all the work he and his fellow church members do in Crossfire and Gangs to Grace.
“You can kind of see how, from a very early time, God was involved and was opening doors, guiding, directing, leading,” Gorny said. “It’s been one miracle after another from the time we met, even going back to [Anthony’s] dad.”

Epilogue
Gorny said he believes Orsini’s story will continue to spread across the Latin King and Spanish Lord communities and that others will try to change their lives based on Orsini’s success at changing his.
“[God’s] got a plan. He works that plan out in our lives, not only for our good, but for the good of all those around us,” Gorny said.
Orsini still has his old nickname, "Malo," tattooed on his arm, but now, he insists on the importance of doing the right thing. He plans to marry his girlfriend in June. He said that trust in God and righteousness are the keys to a better life.
“I pray that there’s more programs out there available, that more and more open to where it’s overwhelming out there for youth,” Orsini said. “The more programs to help youth, the better.”
___________________________________

More on Ronald Gorney and Crossfire
__________________________________
Ronald Gorny uses this same mentoring process in the work he is doing in a different organization, Gatekeepers, which works with youths, ages 15 to 16, in juvenile centers to help prevent them from committing more crimes when they are released.
“If we can reach out to them before they point a gun at somebody’s head, we’re going to be able to do a lot for these kids,” Gorny said.
Gatekeepers asks volunteers to commit a minimum of one year to the teenagers they work with. More information on Crossfire, Gatekeepers and other affiliated anti-violence programs can be found at www.ganglifechicago.com.
Email ThisBlogThis!Share to TwitterShare to FacebookShare to Pinterest
Newer Post Older Post Home