Living Through The Pain

The author was just 11 when her 16-year-old sister Tyesa was fatally shot outside a downtown Chicago movie theater. Days before this past Christmas, her baby brother Tyler was gunned down outside their south suburban home. Here she tells her family's story of loss and also coping and living through the pain.


Not a day goes by that I don’t think about my older sister Tyesa. No matter how much she ever teased me, I always admired how strong and beautiful she was. She was so cool and had the goofiest laugh. And now there is also my little brother Tyler to miss.
Nowadays, each morning, on my way to work, I look at Tyler’s high school graduation photo that I keep above my sun visor. His charming smile is unforgettable. I kiss the photo and I say my daily prayer: “Thank you, God, for who you are and everything that you do. Please give me the strength make it through the day and please protect me, my family, friends, and even my enemies.”
I can’t help but think how short both Tyler and Tyesa’s lives were. Tyesa was 16 when she was killed on Jan. 17, 1992, while leaving a downtown Chicago movie theater with her boyfriend Pierre Dennis whose recent death, even as I write this, I mourn. Pierre was shot and killed in Gary, Ind., just weeks ago on April 6. Slain 21 years after Tyesa, he was 40. Tyler, who was not even born when Tyesa was killed, never got a chance to meet her. He was 20 when he was shot and killed Dec. 22, just three days before this past Christmas, in front of our own home in south suburban Hazel Crest. So much murder. So much pain. So hard to heal. How do you begin to heal, to recover from such tragic loss?
No mother should have to bury their child, let alone two of them. And no sister should have to say goodbye to her siblings in this way. But my story, I realize, is only one of thousands of tragic tales caused by gun violence across the Chicago area. And the severity of this matter has become a national crisis. In fact, we lose our children to senseless gun violence every day.
With murder, there is no discrimination by race, nor age, or gender. Bullets do not have names on them. Too often they claim the innocent, the young. I don’t think anyone ever fully recovers from such a loss. I have learned that in time you simple learn to get by, that life doesn’t actually just move on. Parts of it freeze in time.
The loss of both my siblings have had such a great impact on my life and my family—perhaps none greater than the effect on how I walk, think, breathe. It has made me suspicious of my surroundings. Made me look at people differently. I sometimes cannot sleep. I have sometimes been an emotional wreck. Afraid to love.

I was just 11 when Tyesa was killed. So at an early age, I learned to put my heart in a box and to wear the mask in public. I acquired a love for writing as a way to privately express my feelings. Still, I bottled up my emotions and became a walking time bomb. I dared anyone to give me an excuse to unleash my rage. I know now that I also lost a large piece of my heart back then and that my sister’s murder threw my entire life off course. Not only did I lose my sister, but also a mentor, a friend, and even my innocence and youth.
My deepest secret is that I also lost my mother. As a child I felt empty, to some extent abandoned, and imprisoned. I sank into a depression. It lasted for years. And perhaps, in some ways, I am still digging myself out of that deep dark place. Today, as a mother myself, I can only imagine how my mother must have felt. My sister’s murder made her overprotective of her children. And though a measure of healing would come for all of us, we would never again be the same.
My mother was a single mother of four who worked hard to move her family from Chicago’s South Side to the south suburbs so that we might have a better life. And yet, the irony is that even in the suburbs—even in the shadow of downtown skyscrapers and Chicago’s Gold Coast—she lost a son and a daughter to murder.
The most difficult part of coping with Tyler’s recent killing has been finding the strength to be supportive of my mother. When I look at her, she amazes me. Through it all, she still has faith in God, even if there are days that she doesn’t feel like getting out of bed. And she continues to be strong and to fight every obstacle this cold cruel world throws at her. 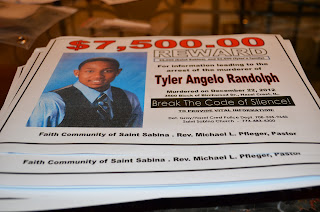 We still have not learned who killed my brother.  Before Tyler’s death, he was spending more time with my son Travis—playing basketball, listening to music, or playing video games. I learned Tyler had told our mother that he wanted to be there for Travis, considering he too was familiar not having his father around growing up. In fact, Travis would try to act a lot like his Uncle Tyler. I would tell Travis to just, “be yourself.”
Now Tyler is gone. The impact on my son and daughter has been devastating.
As a single mother, I have to play duo roles—loving mother and also disciplinarian. My children often see me as the “bad guy.” But as a parent, I feel I have an obligation to teach my children morals and values. I teach them about “love,” about God, about respect, and that there are rules in life.
I also teach them about book sense, common sense and street sense.  And I take the time to listen to them, understanding that one moment, the ones you love most can suddenly become memories in a broken heart. Memories, like a big sister’s goofy laugh or a little brother’s unforgettable smile. I still remember. And not a day goes by.