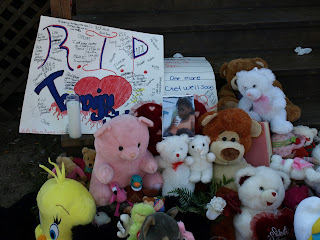 The sun heated the cracked asphalt as two little girls, ages five and three, crossed the street. Holding the hands of their mother, Daphne and Lily, their real names changed in this story for their safety, glanced up at their guardian, their fingers still interlocked, as their mother was shot and killed by her boyfriend.

Months later, the girls, then living with their father and grandmother, visited Casa Central and began counseling with Mary Reynolds.

“They had lost their primary caregiver and witnessed her murder,” said Reynolds, of the affective experience.

While speaking to the girls for the first time, Reynolds recalls a heartbreaking realization. As the girls were playing with Reynolds, the yellow glow of the lights above them warming the room, they asked where their dad was.
“He’s over there talking about what happened to your mom with Ms. Veronica,” Reynolds remembers telling the girls, referring to another counselor at Casa Central.
“He doesn’t know what happened to our mom, only we know what happened to our mom,” said Daphne.
Reynolds attributes this experience, helping Daphne and Lily cope and remember their mother, as something that not only saddens her but also inspires her to help children.
“This horrific experience, as much as we care and hear about it, they alone experienced it,” said Reynolds. “This is how isolating violence can be. They bear that burden alone, no matter how much support they’re given.”
Daphne and Lily worked through therapy beautifully, Reynolds said, trying to remember their mother, make sense of what happened and feel safer in the world. Walking away with enhanced resilience, more effective coping skills and feeling more invested in one’s community is what Casa Central, and in turn Chicago Safe Start, hope to impart.
“As awful as it is, there’s still a lot of healing that is possible,” said Reynolds. “I just wish it wasn’t necessary. I always think about what they could do if they invested these resources in other facets of their lives.”
In an average week, Reynolds concentrates on fixing budgets, grant reporting, staff supervision and therapy provision while also doing community outreach, crisis response and meeting with parents at schools.
“After the school shooting in Connecticut, we were out and about answering parents’ questions. How do you talk to your children? What do they need? What do you need to do?” said Reynolds.
This is what Reynolds is trained for. While attending college, Reynolds worked as a classroom assistant for children of migrant workers as well as in a domestic violence shelter, before moving to Chicago in 2001 to work as a foster care case manager. All of these experiences, she said, attributed to her desire to help children.
“I saw the impact of violence and trauma on young children and families, and saw opportunities to help, and support, and be with families going through really hard times,” said Reynolds, of her love for the work she does. “ I continue to pursue it as a career because I love it so much, and get so much from the kids and families—more than I could ever give in return.”
For children who have experienced or have been exposed to violence, Chicago Safe Start notes that it is important for adults and parents to provide time, affection and attention to children in understanding what the short and long term effects are. Every occurrence of violence is different, as is every child.
“While the world is agitated about young people at the wrong end of a gun, which is either end, we’re looking at children who are refrigerators for trauma,” said White. “They are embodying the things we have failed to address earlier in their lifetime and the lifetimes of their parents and communities.”
According to White, when a child’s body is constantly ready for survival or confrontation after being exposed to violence, it makes it more difficult to move on to executive functions of the brain.
In this respect, White fears soldiers are being bred in the city of Chicago. The best kind of soldier, White said, is one who is prepared to shoot at any moment. And the steady toll of murders in Chicago is evidence alone that those so-called soldiers and their shooting haven’t stopped.
Email ThisBlogThis!Share to TwitterShare to FacebookShare to Pinterest
Newer Post Older Post Home