Heeding the call to stop the violence

By Meredith Dobes
The silver, metallic clang of the miniature gong that follows the announcement of each name infiltrates the sterile silence of the room. It rattles through the eardrums of somber-faced residents. They know what is at stake and what has been lost. None of the children whose names are called out know of this recognition they are receiving.
They are not here in this room, and they are not here, there, or anywhere in this mortal world -- no longer at school, at home, at work or out with friends. They will never know, never hear this ringing for them inside this small room in a building in Bronzeville because their lives were taken from them, primarily as victims of gunfire, as victims of homicide. 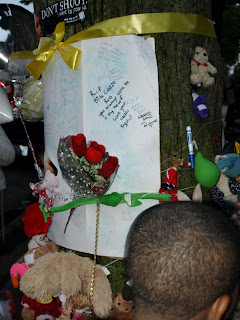 “I sometimes tell people the joke about two vultures sitting on a limb, and the one vulture turns and says to the other, ‘Patience, my ass. I’mma kill something,’” Bell explained. “I get like that sometimes, but I try to stay calm. I know what to do, but nobody’s doing it. Those are my frustrations and difficulties.”
Bell goes back to his work. Jackson goes back to his. Chicago and Emanuel continue their same efforts. And this year’s murder count continues to rise. And at Black Star Project’s press conference on that cold February evening, the community residents who attended bowed their heads as the deceased children’s names resounded across the room.
Email ThisBlogThis!Share to TwitterShare to FacebookShare to Pinterest
Newer Post Older Post Home