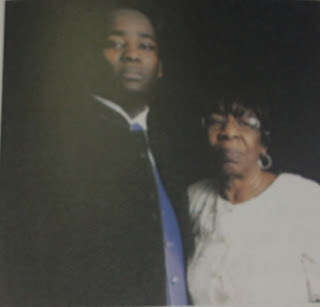 It was Wednesday at 1 p.m., and time for bible study at a South Side church. Those gathered inside smiled or joked and talked about football and apple pie at New Bethlehem No. 4 Missionary Baptist Church. Five months earlier, it was a different scene inside this medium-sized, redbrick church. It was more filled with grief than with laughter, more with pain than with joy over the murder of fellow member Robert Munn who was eulogized here.
Munn, 29, had been involved within his church since he was a little boy, a junior deacon for Rev. Louis Montgomery Sr., founder and senior pastor of New Bethlehem, located at 8850 S. Cottage Grove Ave. He had sung in the choir. He was a DJ and had become a soundman who ran the church’s PA system. And he even helped put together the church’s banquet facility in its basement better known as the Louis Montgomery room.
“We used to call him New Bethlehem. That’s how much he used to do,” said community activist Pamela Bosley. 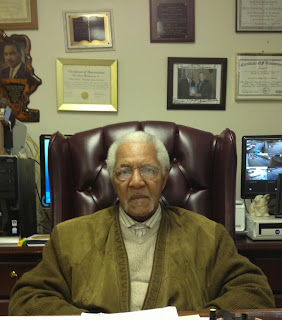 But that’s not all that Munn was known for. For those who knew him as well as Bosley did, they often saw him hanging around a young man named Terrell Bosley. That was her son, and Pastor Montgomery’s grandson.
Like Munn, Bosley was also involved in the church. He played bass guitar. And both were murdered. A further irony is that the murders of both young men remain unsolved. And yet their cases highlight one of the realities of murder in the city of Chicago, where last year 506 people became homicide victims, most of them black males and most of them felled by gunshot.
Contacted several times, Chicago police would not confirm the number of murder cases it solved last year. But according to published reports, the police clearance rate for the 506 homicides in 2012 was 25 percent.
This much is also clear from a review of Chicago police homicide data from 2000 through 2010.  There were 5,758 murders in that time period, 3,183 or 55.28 percent that remain unsolved—among them, the cases of Munn and Bosley. With thousands of murder cases unsolved, it means potentially that killers are free to kill and kill again. It is a sobering and yet somber fact for community activists, for police, for those communities besieged by murder and gun violence. And for families of slain loved ones, there is the absence of any resolution.
Munn and Bosley, friends and family say, became good friends the more they were in each other’s presence at New Bethlehem. They hung out and even came up with nicknames for each other. Bosley would call Munn “Black Rob” and Munn called Bosley “Rello.” And it is for some around here an almost unbelievable irony that the two friends—likeable, faithful to their church, good, solid young men with a bright future—would suffer the same tragic fate.
Bosley, 18, was shot and killed on April 4, 2006 outside of Lights of Zion Missionary Bible Church on 116th and Halsted Streets while going to choir practice.  Munn was shot and killed in Sept. 24, 2012, across the street from the church, leaving his grandmother’s house in the 8800 block of South Cottage Grove Avenue.
“I relived Terrell’s death when this happened to Robert,” Pamela Bosley said. 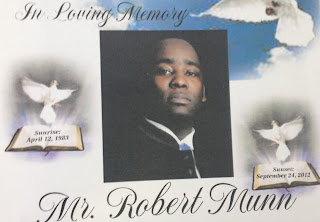 After her son’s death, Munn would help her family as much as he could. He would be the one passing out flyers, trying to find some way to solve the case. She knew what she must do after his death.
“That same week, when it happened, I was like, OK; I gotta pass out flyers for Robert, cause Robert always that with me,” she said.
Munn was a helper. Bosley mentioned an older woman’s reaction when she found out of his passing. She would say, “They killed Robert? He was helping me; he always helped me.”
Leon Hosley, deacon and owner/barber of Leon‘s Barbershop, didn’t know much about the young man. But what he did know is that he would come in and get a haircut, speak to him, and go about his business. If anything, Bosley knew him as a “church boy.”
Pamela Bosley says she still cannot fathom why Munn or her son was killed. There’s no one in custody, and she’s craving to know what happened to trigger such an act of violence.
“I would love to know who shot Terrell and who shot Robert, so we can know what happened,” Bosley said. “It’s gon’ bring justice, but it’s not going to give me no closure. I do want that person, those individuals, off the street for this.”
Email ThisBlogThis!Share to TwitterShare to FacebookShare to Pinterest
Newer Post Older Post Home