The murders of two children; More than one mother's heart can bear

In a daze, on a silent January night, Delphine Cherry stands, staring at a house across the street. Her fingers tightly gripping her dog’s leash, they both appear calm, still, though inside, Cherry is smitten with anger.
Two weeks have passed since the murder of her son, Tyler. Her eyes transfixed, she watches as shadows move about the house.
“They’re moving around like nothing ever happened,” she says softly.
For a number of reasons, she says, she believes she knows who killed her son. And she believes some of her neighbors are key to solving the question of who murdered her son. Delphine Cherry is no stranger to tragedy. Along with the death of her son, Cherry’s daughter Tyesa was also shot and killed, walking out of a movie theatre 20 years earlier.
And with two of her four children gone, Delphine carries on, battling the anger and a certain sense of denial, unsure of what to do next.
Tyler, whose last name is Randolph, was shot in the driveway the evening of Dec. 22, right outside Cherry’s Hazel Crest home, just yards from his front doorstep. After being shot, Tyler, 20, managed to rush to his neighbor’s house and was subsequently taken to South Suburban Hospital, then airlifted to Christ Hospital in Oak Lawn, his mother says. He passed away soon after. South Suburban claims he was shot in the back, Christ said the chest. She has not yet received a coroner’s report.
Months later, many questions remain unanswered for Cherry. Her eyes tired, she sits uneasily in her two-story home. A house used to holding gatherings for various family members and friends sees visitors much less now. The pink carpet seems less vibrant, more solemn.
“Tyler used to love this house so much. He felt so safe here,” she said. “But I should have known. I should have said ‘forget the house’ and just moved.”
For what Cherry now knows continues to weigh her down with regret. 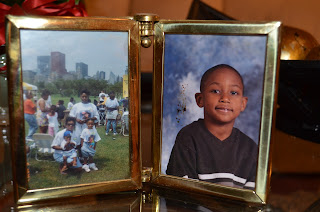 Before moving to Hazel Crest in 2000, the Cherrys were the first black family to move to Alsip, another south suburb, where they lived for 10 years, she says. Then followed short stays in nearby Blue Island and Calumet City. Once in Hazel Crest, Cherry purchased the house once she realized it was in foreclosure.
“I didn’t want my children to live in Chicago,” she says, explaining that locating to the suburbs was her short-term plan. “When Tyler got out of high school my goal was to move south.”
To Atlanta, Cherry hoped. Though once she moved into their home, Cherry found a job as a probation officer for the Cook County Department of Social Services and worked up until being laid off in June 2012.
The house that Cherry and her family joyfully moved into now haunts her. She recalls memories of Tyler wrestling with the dog in the living room at 3 a.m., summer pool parties in the backyard and sending Tyler off to high school prom. Though nowadays, every time she walks out the front door, she stands at the site of her son’s death.
“I’ll never forget him telling me, ‘“Momma, I’m so afraid of somebody coming in here,”” she says. “I told him ‘Tyler, you don’t have to worry about them coming in here.’ But how did I know that they’d be waiting for him on the outside?”
Cherry says that in 2011, Tyler received a phone call to pick up a friend in need. The friend, she says, had stolen a purse outside of a Family Dollar. After Tyler picked up that friend and brought him back to the Cherry house, Hazel Crest police soon arrived. While Tyler faced the police at the front door, the friend escaped out the back door. With Tyler’s phone confiscated by police, they later locate that friend as well as Tyler and arrest them both, according to Cherry.
“From then on, my son had been labeled a snitch,” says Cherry, adding that Tyler was robbed in February 2012, jumped and beaten a few months after that. Cherry alleges that Tyler’s friend, arrested over the purse, partook in both of these acts against her son, and that the friend also may have played some role in Tyler’s shooting death in December.
“Ever since my brother met him its just been nothing but trouble,” says Tamika Howard, 32, Delphine’s now eldest daughter says of her brother’s friend. “It’s sad because that’s what he knows: stealing, violence.”
According to Det. Anthony Gray of the Hazel Crest Police Department, as of April 2013, the case remains open and they have not located the shooter.

Before giving birth to three girls, Cherry had always wanted a boy. Tyesa was born in 1975, Tamika in 1980 and Tracii in 1989.
“I figured boys would be easier looking from my mother’s experience,” says Cherry, who was raised by a single mother and has two sisters.

Sunshine
Delphine Cherry gave birth to Tyler exactly nine months and two days after the murder of Tyesa, 16, in 1992. With the pregnancy unexpected and her first-born daughter dead, Cherry was convinced she would put Tyler up for adoption, only to be persuaded otherwise within 24 hours of his birth.
“I really thought I was faced with this injustice. Here you are,” Cherry says of God,  “taking this child away from me and giving me another one, the boy I always wanted.”
But as Tyler grew older and Cherry began to spend time with her son, she began calling him her “sunshine,” and still does today.
“He took those feelings away because I was so busy with him,” she says. “It helped me.” As he aged, Tyler became interested in cars and producing music, got a job at Walmart and took care of the house he loved--mowing the grass in the summers and shoveling in the winter.
“He wasn’t anxious or thirsty, but he was eager to really show the world what he was made of,” says his sister, Tamika. “If he wasn’t cheated of his time, he surely would have had the opportunity to leave his mark on the world.”
With such an opportunity vanished, Cherry spends much of her time in her room with the door closed, as it is painful to wander around their beautiful home, thinking of Tyler. She has yet to clean his room out or send thank you cards for condolences sent. She became upset at seeing her young grandson wearing one of Tyler’s T-shirts.
“I know I’m in denial,” she says. “My thing is, my son is going to walk through that door. Maybe this is all a nightmare.”

Epilogue
Artifacts of Tyler’s short life are scattered around Cherry’s home. Notebooks with memos and raps written in them and wallet-sized school photos are sprawled out along the dining table.  There is a pile of freshly printed flyers, offering a reward of $7,500 for any information on the murder of Tyler Randolph.
As her daughter Tyesa’s death was devastating, now 21 years ago, the death of her son angers Delphine Cherry.
“It’s like a dagger in my stomach. Instead of being pulled out its being twisted more,” she explains. “I don’t sleep at night. I’m on medication. I’ve lost about 15 pounds.”
While Cherry possesses a great deal of pain, she has always held a drive to help others. Always an active mother, offering advice to troubled children or sticking up for her own when no one else would, she plans on starting a foundation, “Ty,” in honor of her two slain children. The organization will be designed to help those who have lost multiple children to gun violence.
“She doesn’t understand how empowered she is,” says Tamika Howard, standing beside her mother. “She is a role model. My mother has birthed four, but she has raised so many other children.”
Except she now carries in her heart the burden of burying two of her own.